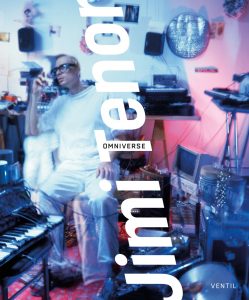 I have always had two major interests in my life, music and photography.

While I was at high school, music started to take up so much of my time that I almost had to give up photography. But I could never really quit; I kept taking photos and shooting super 8 film. I was a big Andy Warhol fan and I was really interested in silkscreen too.

Then in around 1992 I thought that my dreams of a music career were over so decided to try and become a photographer in New York. My plan was to start out as a studio assistant and gradually become professional but those jobs proved tricky to come by. I ended up working at the Empire State Building as a tourist photographer and spending my spare time taking arty photos and making music. There are plenty of photos from back then in this book, mostly from my friend Hitoshi Toyoda’s archives. He worked with me at the tourist photo booth and has an ongoing photo diary project. We spent a lot of time together in those days, often drinking after work at the Dominican restaurants until the early hours. Then I’d wake up at 10 the next morning and make music until 3 pm when I had to leave for the Empire State Building again. I was very productive in those days!

So by 1994 I was back in the music world and this time it was for real. I started making albums for Sähkö Recordings, Warp Records, Bureau B and many others. I started my own Ronet label to release 7″ singles, put on a wild stage show at Sonar and collaborated with everyone from concert orchestras to Tony Allen. My photography skills have been very useful in the music world and I have been able to create some interesting PR shots and album covers over the years, some of which are in this book. I hope you enjoy your time with my sights, sounds and stories!