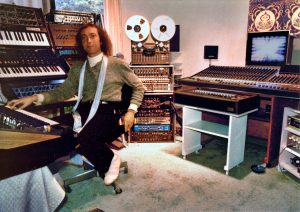 French electronic music from California: “Last Wave”, the fifth solo album by the artist and musician Bernard Xolotl, was originally released on cassette in 1982. He named himself after the Aztec god of lightning and death. His music is influenced by the Berlin school of electronic music. This reissue includes a previously unreleased bonus track (not on vinyl)!

Bernard Xolotl on the creating process of “Last Wave”:
The first “Last Wave” I started early on while still living in San Francisco, as a simple and longish piece which could be used as a background for the concerts I was giving with Daniel Kobialka and Richard Horowitz, both of whom I saw almost every day at that time. However, after I moved to the residential suburb of Marin to build up my studio, I kept adding tracks to it so it just became part of my next album. This was going to have more instruments and progressively, I got to do everything myself, playing and recording one track at a time. But mixing there was still out of the question, so I had to wait for the right opportunity to use the proper San Francisco studio with the best reverbs and acoustics. This took several years in the end and was the last album I didn’t mix at home. It was also the last “analogue” album and the “last” many other “things” which made the title very significant in my life …